Sundra Flansburg is a leader at First Unitarian Church, co-chair of our Restorative Justice Action Team and past VOICE Board President.

It was in a VOICE meeting about five years ago when I first felt in my soul the social and political segregation we live in here in Oklahoma. I – a white woman – was talking with an African American man from one of our other member institutions. We were sharing parts of our story with each other, and he spoke of being out of prison and the struggles he had reestablishing himself coming out of incarceration, even with his resolve and the help of his church. He brought up his monthly payments to the court. 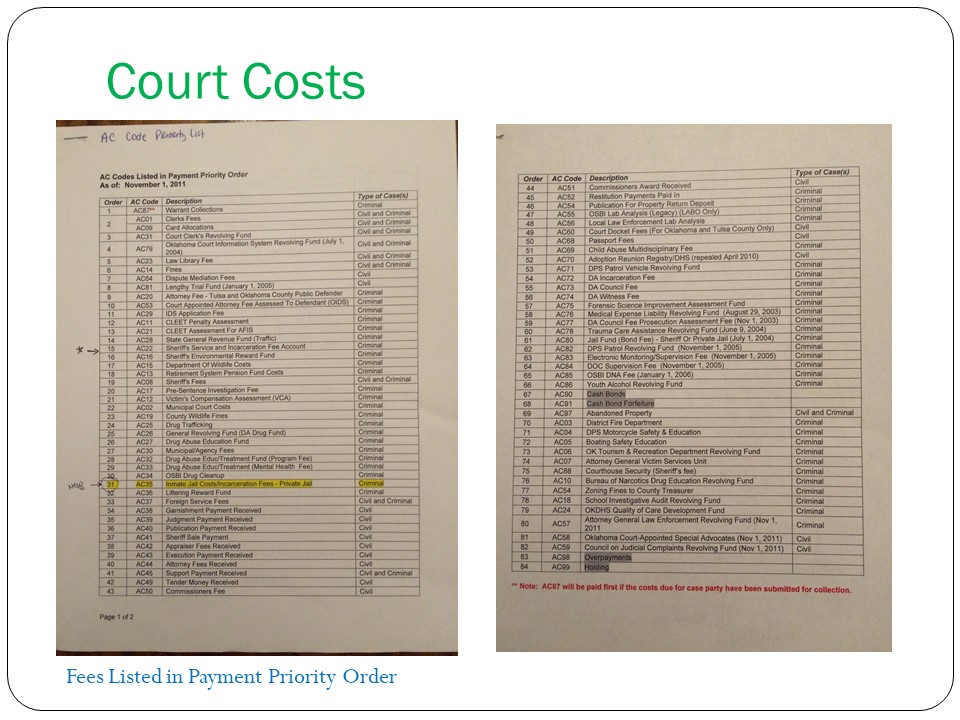 “What,” I said, “you have to pay fees in addition to serving time?”

“Ya,” he replied, and proceeded to tell me about the thousands of dollars he was expected to pay the system in fees for his conviction and time, at the same time that he was struggling to find a job that paid anything more than minimum wage. He would have also liked to be able to help with childcare expenses for his children.

At the time, I had no clue that in addition to coming out of prison and trying to re-establish housing, job, family ties, and all the rest, many people were coming out of with thousands of dollars of debt.

I had first been drawn to restorative justice work after reading Michelle Alexander’s The New Jim Crow: Mass Incarceration in the Age of Colorblindness. While I had been somewhat aware of many of the issues Alexander covered in the book, she connected the dots in a way that changed me. Angered by this newfound understanding, I couldn’t, however, find a way to act on it.

That is, I couldn’t until someone told me about a study program that was being led by Pastor Jesse Jackson of East Sixth Street Church. I began attending those sessions at the Ralph Ellison Library. Eventually that church, and Pastor Theodis Manning, Sr.’s, church, Divine Wisdom Worship Center (an amazing church with a range of ministries related to incarceration, re-entry, and anti-violence) joined the VOICE coalition and requested that restorative justice be added to VOICE’s agenda of issues.

It was by being part of house meetings and by doing individual meetings with Divine Wisdom members in particular that I began to get a better understanding of what mass incarceration looks like in a state with high levels of poverty and a severely underfunded criminal justice infrastructure. I also began to know many of the people that system was harming. Though they are determined to change their lives around and be contributors to their community, they will always be remembered for the worst thing they did in their life. In Oklahoma, that felony conviction haunts between 1 in 8 and 1 in 12 people.

VOICE’s first major work in this area was to research the fines and fees we were hearing about related to the courts and incarceration. One of the things that stands out for me now is how many city and county officials seemed not to be aware of the extent of the fees being charged, and the thousands of dollars that this population of poor Oklahomans was carrying at the “end” of their involvement with the system. In other words, officials would be somewhat aware of court fees if they were connected to the courts, or of jail fees, if they approved the bill collection contracts that the Sheriff’s Department worked with – but not what that accumulation looked on an individual as they tried to re-establish their life.

VOICE leaders from several churches spent many months researching fees and put together a groundbreaking presentation that explained the areas in the criminal justice system that were charging fees and showed how the massive cost of incarcerating at one of the highest levels in the country was being pushed down from the state budget that underfunded every piece, to counties and cities, and ultimately to individual Oklahomans. 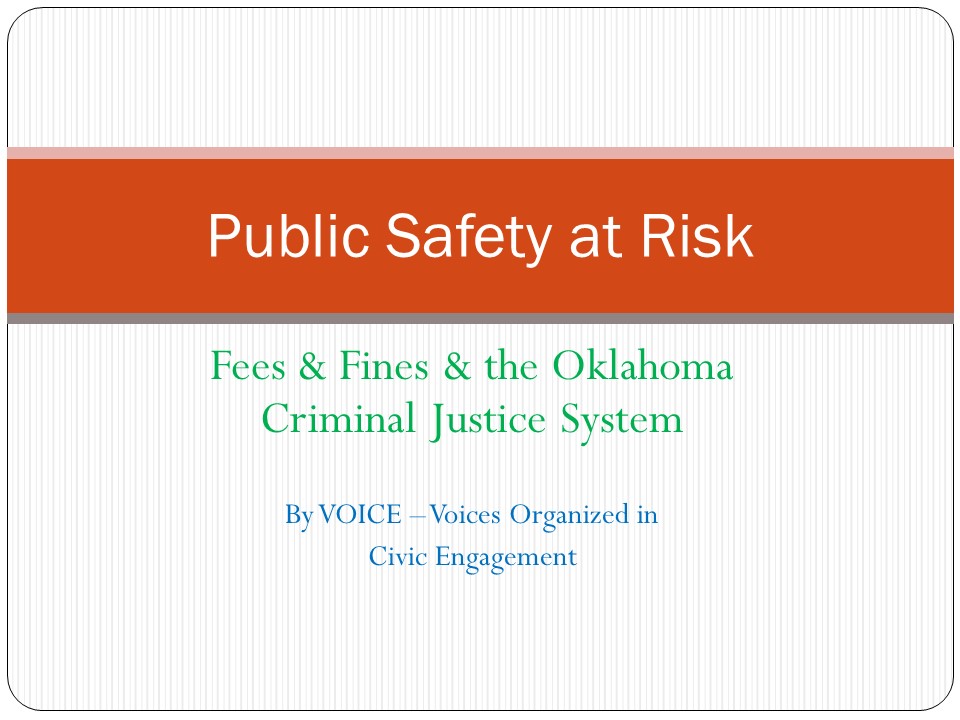 An important aspect of that presentation for me was communicating what an individual’s household budget looked like if they had a minimum wage or even higher wage job and were trying to manage monthly payments on criminal justice-related debt along with rent in a sober living facility, bus fare, and a subsistence level grocery budget. None of the scenarios work economically. The amount of the system that fees on individuals is expected to cover creates problems for all Oklahomans, not just those who are struggling to pay the fees. 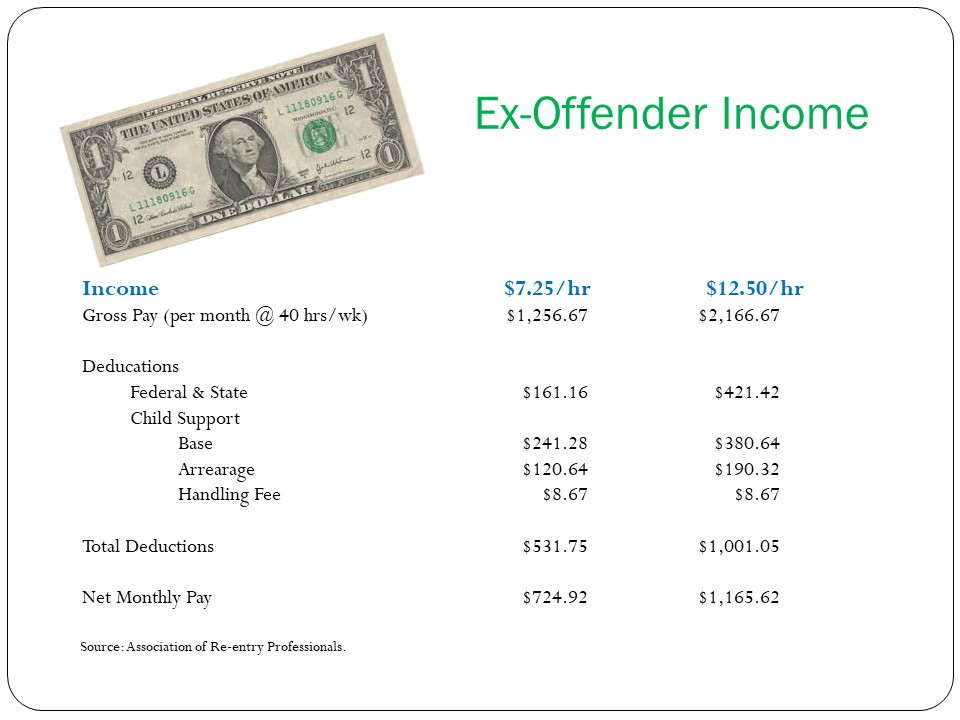 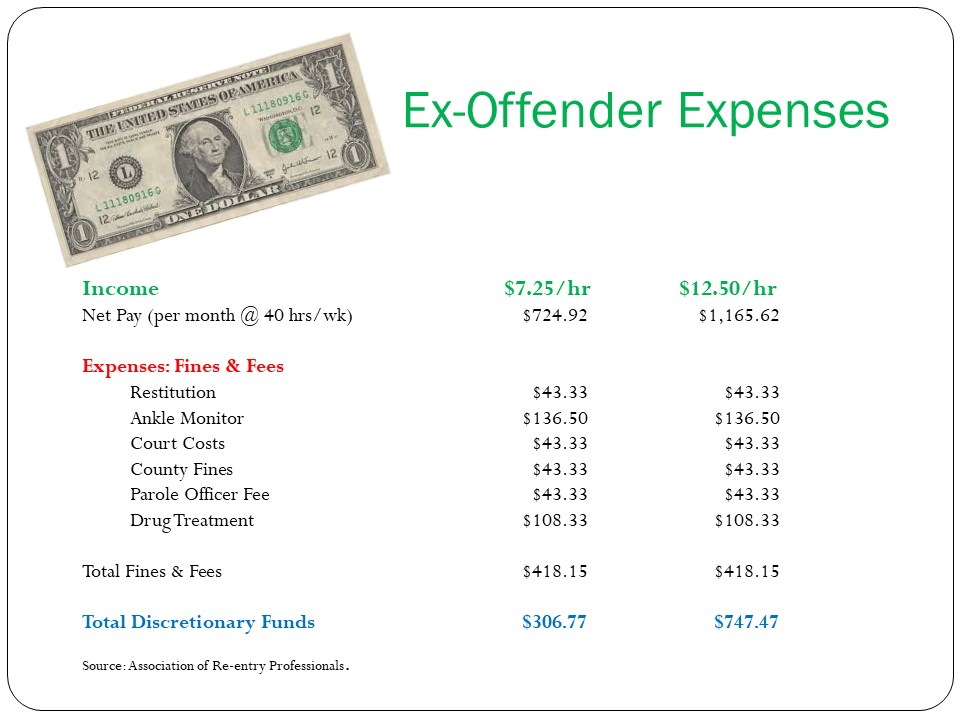 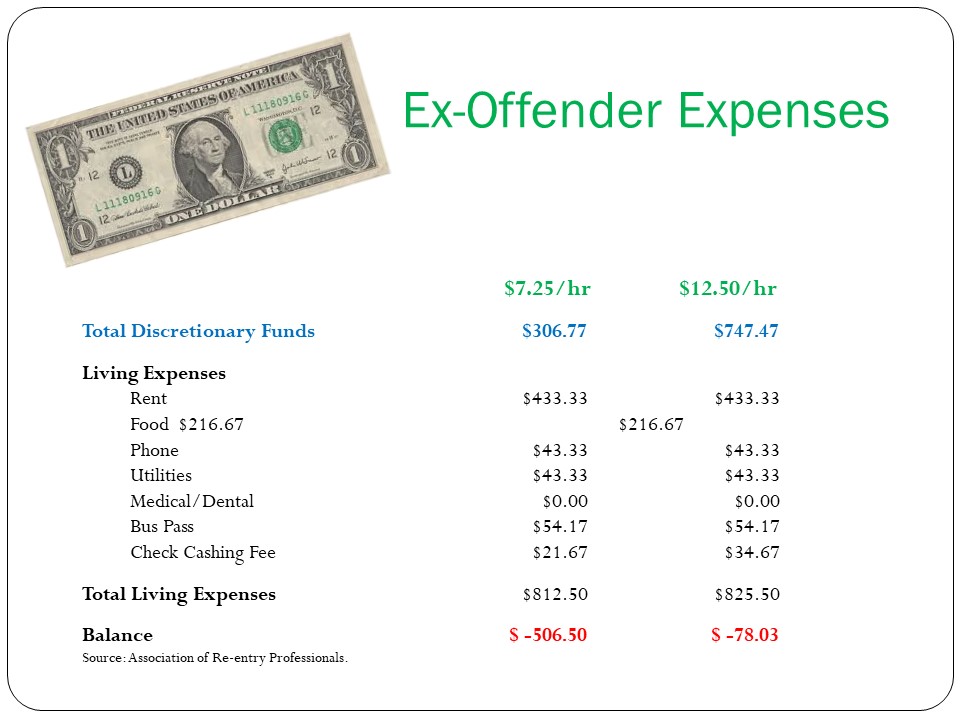 We have new work on our plate with restorative justice these days, with disturbing conditions at the Oklahoma County Jail, and potential retroactive options for people who currently have a felony conviction for low-level drug offenses that are now misdemeanors. 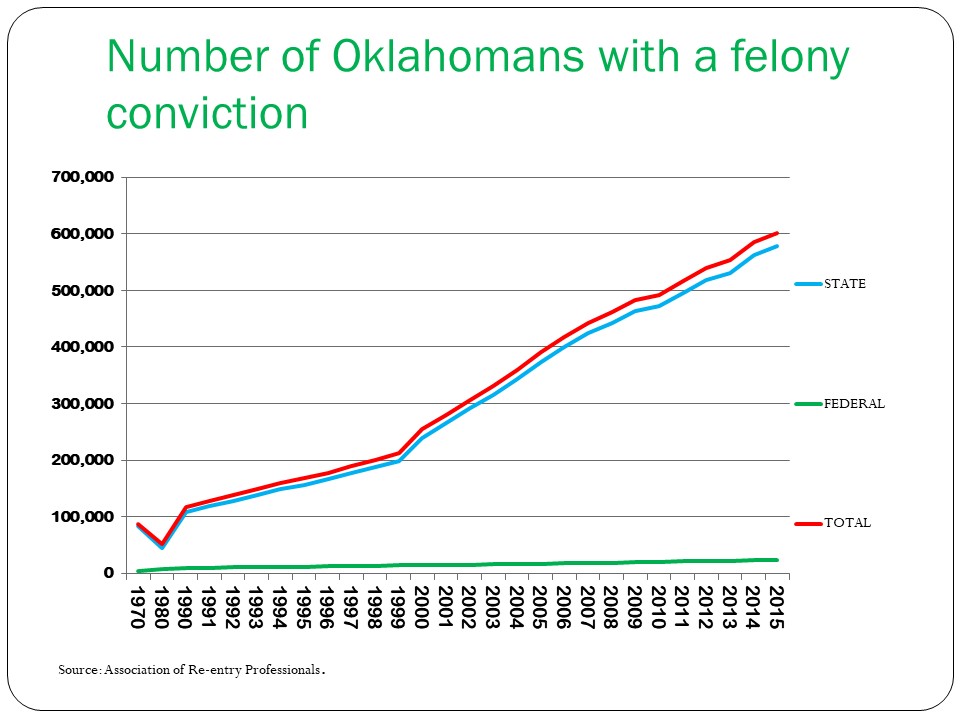 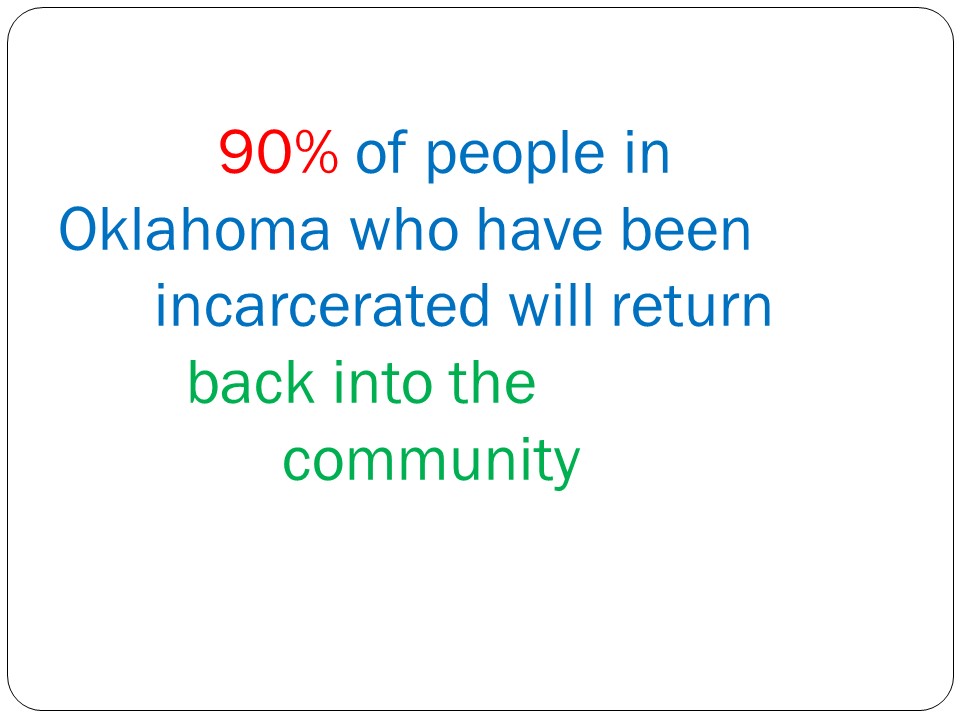 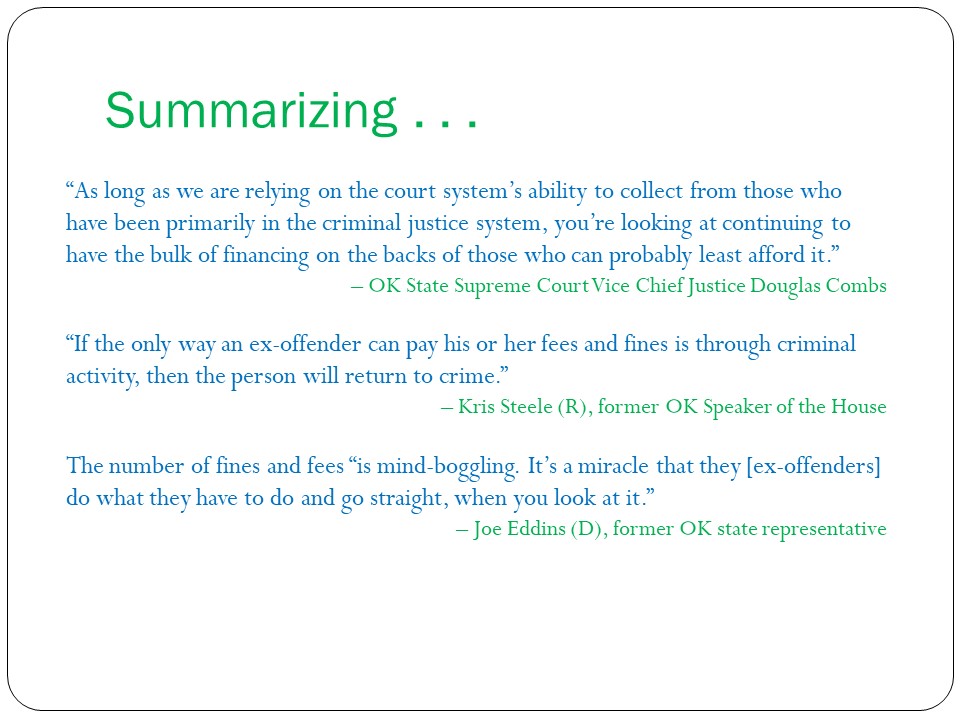 What I truly value in my work with VOICE on restorative justice are the relationships being built across the walls that too often divide us in Oklahoma City, and knowing that this work is not just another “issue,” but one that impacts me and people I know and care about.